What a ride so far, we have launched a website, gotten almost 400 fans on FB, helped sponsor a training event with one hundred attendees and have shared information with over 4000 Facebook users! Along the way we have joined groups, liked pages, spoken at four public events and made a forty minute precinct training video, which we live streamed. And in our spare time….

Suffice it to say the OKGrassrootsProject.com is making quite a splash and the momentum is building. We are sharing precinct and county convention information, connecting people with their county chairs when we can’t find the info and answering as many questions as we can. It has been a busy two months.

The 20 Counties We Will Focus on First. We are Ready to Help You Get Started

When it comes to fixing things politically in Oklahoma, your county means more to you than the others, we get that. The plan is to put grassroots grown, self-sustaining, precinct town hall meetings in every county in the state, but the reality is, that like some states in the presidential election, some counties are more strategic than others.

With the precinct meetings now underway, the county and state conventions are coming quickly, and some have already happened. We wanted to put the call out for people who live in 20 strategic counties that we think will be instrumental in helping get the movement going quickly. What OK Grassroots Project Can Learn From MLK

Hello OK Grassroots Project Nation! We have a really BIG week ahead. Starting tomorrow with our OK County Precinct Leader Training and ending up next week with Oklahoma County Precinct Meetings on the 27th. There are several other counties happening that day as well, so next Tuesday will say a lot about what we have been able to accomplish in the last month.

Today, we celebrate the legacy of a man that helped to shape the modern American social landscape. He was arguably one of the most influential voices of the entire twentieth century. Martin Luther King, Jr approached what most considered an impossible task with confidence and faith, and in less than ten years, his work would completely and permanently rewrite the course of American history, and cause ripples that are still echoing around the globe today. So, we face a similarly huge challenge, what can we learn from this man and the movement he helped to inspire?

How to Get From Zero to Sixty Thousand in a Year!

As we have met with groups over the last week to share the vision of the OK Grassroots Project, Porter has been explaining that we only need 3% of the voters to get things back on track and keep them on track toward making Oklahoma a free state. When you add it up, that comes to about 60k. That is a lot of people, larger than many entire cities in our state, and certainly enough people to get their point across. But it is a significant number for a couple of reasons:

We are hoping to have a much more complete list of GOP precinct and county convention meeting times and places by tomorrow, but here is the list we have so far. Would you please take a moment and share this page with your FB page, group, on forums, or however you communicate. We need people to know where and when to show up to get involved if we are going to make an impact. In some cases it seems as if the party officers are making this as difficult as possible. We can change that for next time, but we have to show up first! Please contact us with any county information you have that is not on this list!

News Update From the Grassroots Front!

The perils of grassroots politics in the twenty-first century are many and varied. There are the age old bogey men of party politics and political intrigue. Then there are a new set of issues brought on by our changing media and communications structure. We have experienced some of that this last week.

Please remove this link from your post or enter the security code below if you’re sure you want to include it. 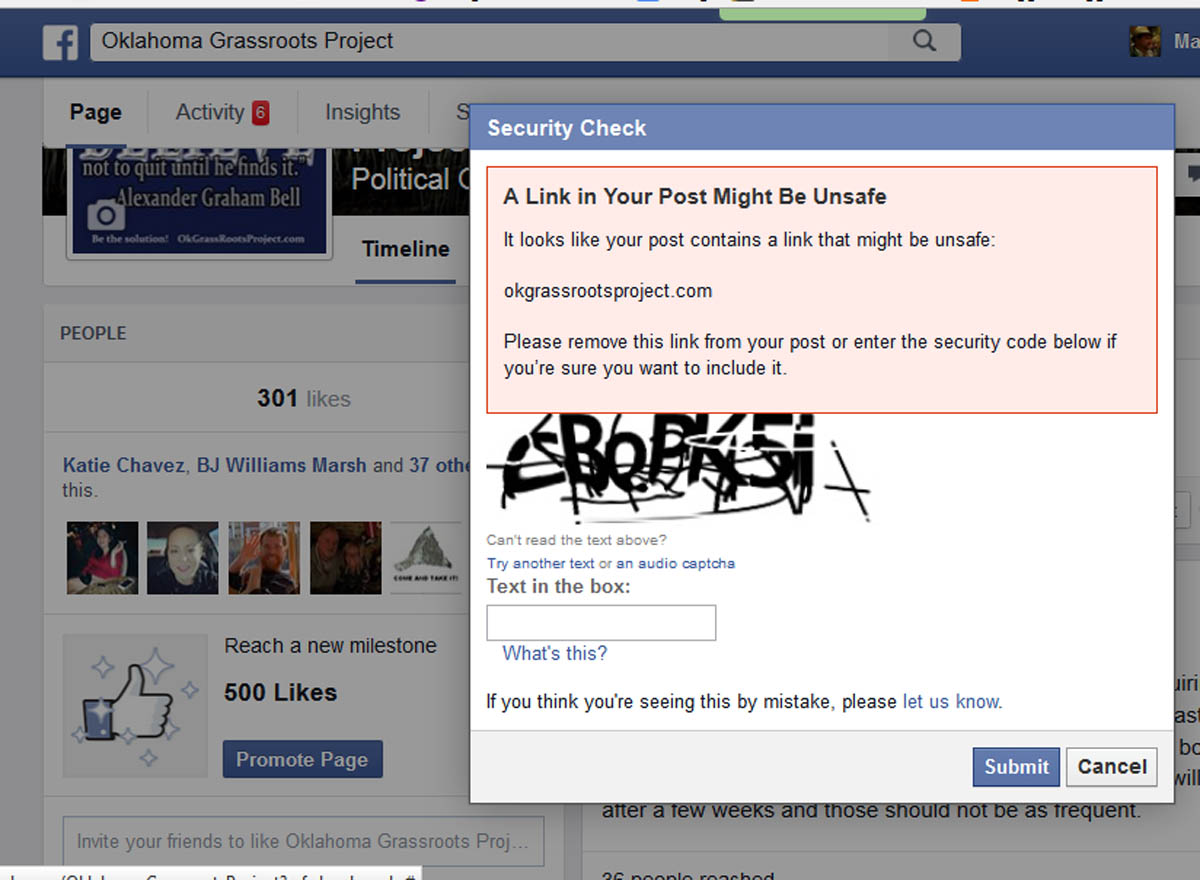 This message has popped up on the screen of several supporters in the last few days and is, understandably, causing concern. It's a good thing! Here is why:

So, I take it as a badge of honor that you guys are doing a great job at getting the word out!

Wow. Things are beginning to move so fast around here. It is amazing what can happen when you decide to take action and ask others to join you. Our Facebook page continues to grow, and should eclipse 300 fans (real fans who are actually talking, liking and sharing) today or tomorrow and the list of  you receiving our emails grows daily. Thanks. We are humbled and grateful for your support.

The Battle Has Begun!

Last night we had another amazing time with some liberty minded folks and found out some energizing news. It seems that several counties in Oklahoma are already engaged in holding their precinct meetings, which we believed would not be announced until after the 13th. In addition to this, so few counties actually have a page on the OKGOP site that information is rather hard to come by. Here is what we need:

Hello OK Grassroots Project Nation! If you are reading this I have officially established the RSS feed automation to be able to post blog posts to the Facebook page. YAY! This will save me a lot of time and trouble. I hope you all are planning to join us tonight for the Phone conference precinct training. If not, please look at yesterday's post and sign up!